Byron Bay father looking ahead to a brighter future

It took a severe health crisis and stern words from a passionate ER doctor, but Shane Dunbar-Reid now has the diabetic eye disease – that threatened to blind him – in check.

“You’ve just got to keep your sugar levels under control. Check them daily – a few times a day – and get your eyes checked. You can’t risk going blind.

Get checked. It’s that simple.”

45-year-old Shane, a father of two and an ardent surfer from Byron Bay, is now reaping the benefits of doing just that. His diabetic macular oedema (DMO), a severe complication of diabetic retinopathy, is now well controlled and his glucose levels are now better than they’ve been in a decade.

Shane’s health has improved so much, that the eye injections he receives to maintain his sight are now scheduled very eight weeks, rather than every four. It’s a huge improvement, and one that didn’t look possible a year ago.

Diabetic retinopathy is the leading cause of preventable blindness in working age Australians and everyone with diabetes is at risk.

Diabetic macular oedema – the eye condition Shane’s been battling for years – is a complication of diabetic retinopathy. It’s the most common reason people with diabetic eye disease lose their sight.

But a recent poll, commission by Macular Disease Foundation Australia (MDFA) to mark Macula Month in May, discovered less than 30 per cent of Australians aged 50 to 70 had never heard of either diabetic retinopathy or DMO.

This Macula Month, MDFA wants to ensure Australians not only know the names of these diabetic eye diseases but understand their risks and take action to avoid irreversible loss of sight.

Diagnosed with type 2 diabetes as a teenager, Shane “didn’t want to know” and made no effort to change his lifestyle. His first wakeup call came in his 30s, when he developed a diabetic ulcer and nearly lost his big toe.

By good fortune, Shane had a close friend who was an optometrist and badgered him into having regular eye exams – a must for people living with diabetes. So, when Shane noticed some blurry vision while he was driving, he sought treatment straight away.

With aggressive treatment from his ophthalmologist, Shane’s sight was saved.

“My ophthalmologist described it (the diabetic macular oedema) as being like a bushfire – we just had to keep pouring everything at it to try to save my sight,” Shane recalled.

For several years after that, Shane was able to keep both his diabetes and his diabetic macular oedema under control.

Then the COVID-19 pandemic hit, and Shane and his family went into lockdown. Like many Australians, he wasn’t as vigilant about his diet.

“My sugars were a bit out of control. You think ‘it’s okay, I’m alright, I’ll get through it’. But you can’t.

“I ended up in the emergency department in Tweed Heads in August 2020 with a large abscess. I was in hospital for a week and had to have the wound cleaned for three weeks. It was hard. It hurt.

“I had a doctor in the ER – Dr Andy, I call him – who was the most amazing doctor I have ever seen. He must have been so busy, but he spent time with me and had every doctor on this sweet earth come to see me.

“I copped it from him. He wasn’t mean but he made this grown man cry. He said ‘listen, you can do what you want to do’ but he told me about having to cut off people’s toes, legs, arms, fingers (as a result of complications from uncontrolled diabetes).

“It was a turnaround for me. He changed my life. He saved my life. I love him for it.”

Changing behaviours to save sight

Even though his lapse in controlling his sugars took a toll on other areas of his health, Shane hadn’t noticed any visual changes. And he was still receiving eye injections every four weeks to control his diabetic macular oedema.

But he says when he cleaned up his act and started taking better care of his diet and lifestyle, his ophthalmologist noticed the difference.

Shane says his sugar levels are the best they’ve been in more than a decade. He working hard on changing his habits, and getting the support he needs to keep his diabetes in his “green zone”.

“I had a little bit of a splurge at Easter. Sugar is a drug. I love it, but when my levels are high, my family notices. I get real snappy. I’m a nightmare.

“So, I did a three-day detox. I can’t cheat. It’s the only way I’m going to get better.

Looking to a brighter future

Shane says his sight is good and he’s determined to maintain the diet and lifestyle changes he’s made to keep his diabetes under control.

For now, he’s teaching his teenage kids to drive, he’s able to read, and hits the Byron Bay surf with his son each weekend.

“I still get a bit emotional when I think about Dr Andy. He was unreal. He made me change my life. I’m surrounded by supportive people. But this guy? This guy gave me 110 per cent. He’s a dead-set good bloke.”

60 seconds could save your sight

How’s your macula? Macular disease is the leading cause of blindness and severe vision loss in Australia. The two most common macular diseases are age-related macular degeneration (AMD) and diabetic retinopathy.

This Macula Month we’re urging all Australians to take 60 seconds to find out their risk factors.

Head to www.CheckMyMacula.com.au. It’s a free online quiz developed by MDFA that shows you your individualised risk factors for macular disease. Five questions and one minute is all it takes. That’s 60 seconds that could save your sight. 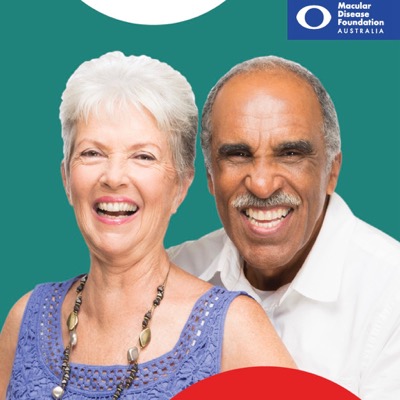 Too many Australians have their eyes closed to diabetic retinopathy – the leading cause of blindness among our working-age population, a new Macula Month study has revealed.

Do you know your risk factors for macular disease?

One minute and five easy questions is all it takes to find out more and learn what to do.

MDFA’s summary of the past 12 months’ research into macular disease.

The Spring 2021 Vision Voice leads with the Health Minister Greg Hunt, seeking to allay your concerns around Medicare rebate changes.

MDFA continues to advocate against a proposal to cut Medicare rebates for eye injections and met with the Health Minister in June 2021.

We’re seeking to clear up any confusion around deferring eye appointments during lockdown.

You should seek advice from your optometrist or ophthalmologist before deferring eye appointments during lockdown.

MDFA is delighted to officially welcome Dr James Muecke AM on board as our diabetic eye disease Ambassador.

With Governments around Australia rolling out vaccines for COVID-19, a frequent question to our National Helpline is about safety of the vaccine when receiving eye injections.