The type of ‘visions’ or ‘phantom images’ associated with Charles Bonnet syndrome can be quite simple and seem to fit into your surroundings, or quite bizarre.

These phantom images are sometimes incorrectly labelled hallucinations, which refers to sensory experiences that the recipient believes to be real. Typically, someone experiencing CBS will realise their visions aren’t real.

The simplest explanation for CBS is that when vision is lost, your brain isn’t receiving as many pictures. So your brain releases new fantasy pictures, or old pictures that it has stored, and you experience them as though they were real.

The syndrome is named after a Swiss philosopher, Charles Bonnet.

In 1760, his grandfather, who was almost blind, saw patterns, figures, and buildings that weren’t there. Although Charles Bonnet described the condition more than 260 years ago, it is still largely unknown by many health professionals.

This is partly because of a lack of knowledge about the syndrome, and partly because people experiencing it, often don’t talk about Charles Bonnet syndrome for fear of being considered as having a mental health problem. 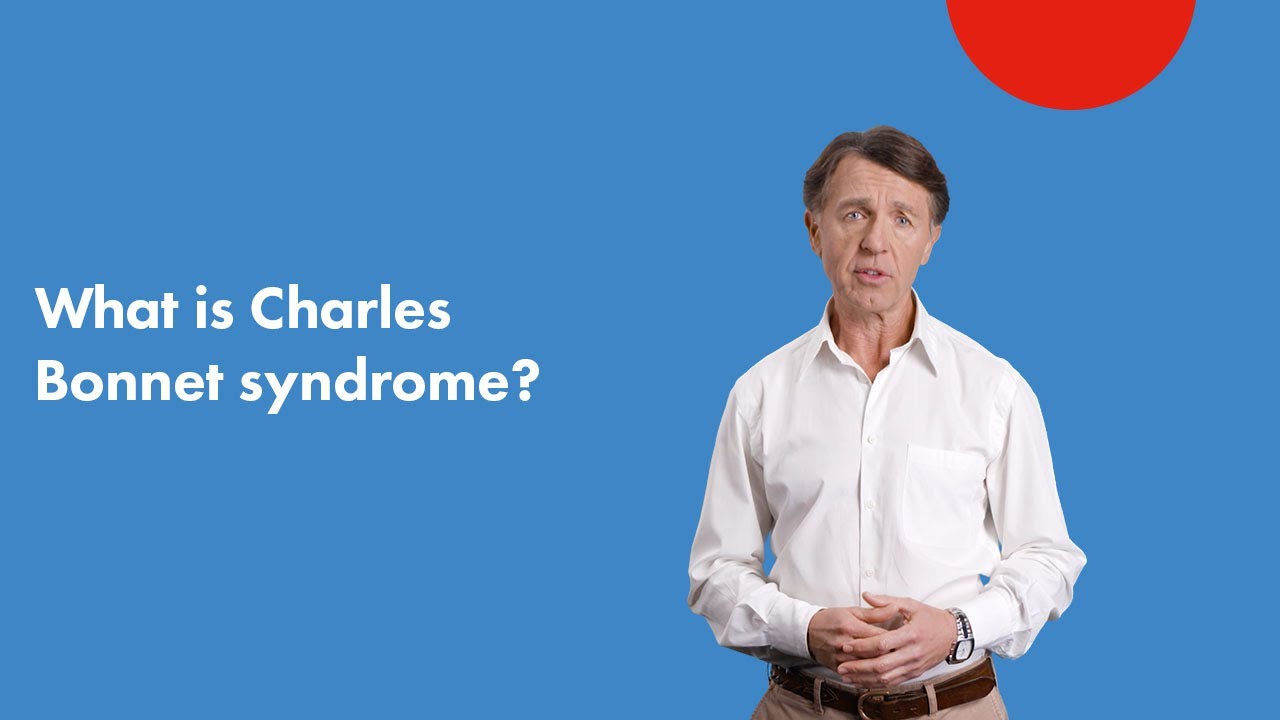 What kind of phantom images do you see with CBS?

The phantom images often fit into a person’s surroundings.

They can also be quite fanciful – such as seeing dragons or fairies. They can be unusually vivid in colour or black and white. They may involve movement, or they may be stationary. They can appear real, or unreal.

Generally, if you experience these visions, you will realise they are not real. And you’ll only see them. You won’t hear, smell or taste them.

The visions may come and go and will often stop altogether within a year to 18 months. Sometimes, though, they may continue for many years.

These experiences seem to happen in quiet times, when not much else is happening. For example, if you’re sitting along in a quiet, familiar place, if you’re lying in bed at night or sitting in the dark.

Who gets Charles Bonnet syndrome?

It can happen if you’ve had relatively minor vision loss, but this is rare.

Should I be concerned?

Seeing things that aren’t there can be worrying for some people, even though the images themselves usually aren’t threatening.

Sometimes, people worry that Charles Bonnet syndrome visions are a sign of mental health problems. So they don’t talk about what they’re experiencing with relatives, carers or friends.

Charles Bonnet syndrome is caused by failing eyesight. It is not a mental health problem.

Having CBS doesn’t mean you’re more likely to develop any other health conditions.

Generally, Charles Bonnet syndrome visions won’t impact your everyday life and activities. Sometimes, however, they can make it more difficult to get around. For example, if the street or room you’re in seems to have changed shape, or a fence suddenly appears in front of you, it can be difficult to judge exactly where you are, and whether you can walk straight ahead. Good knowledge of your surroundings can help overcome this particular problem.

The complicated pictures can sometimes be challenging. Although the visions themselves may not be of anything frightening, it can be disturbing to start seeing strangers in your home or garden.

Some people have overcome this by getting to know the figures in their visions.

One man has told us that when he wakes up in the morning, he welcomes his phantom images of unknown people. By speaking to them directly, he feels some control over the way he feels about them. Another woman, who regularly sees phantom eyes, says she consciously reminds herself how much she misses seeing people’s eyes in her day-to-day life, and so started to appreciate her visions.

If you understand the cause of Charles Bonnet syndrome, it may help you to better deal with the experience.

Is there a cure for Charles Bonnet syndrome?

There’s no proven treatment or cure for CBS.

The frequency of phantom images can vary greatly. You might experience visions anywhere from a few days, up to many years. They could last a few seconds, or continue for most of the day.

Generally, these experiences will disappear after about a year, or 18 months, but this won’t happen for everyone.

If you are experiencing CBS, understanding the syndrome, knowing it is not a mental health issue, and coming to terms with your visions appears to be the best course of action.

There are a few activities that may help to make the phantom images stop. Interrupting your vision for a short time by closing your eyes or blinking, or moving your eyes – from left to right and up and down – may help. Sometimes, changing your environment also works. So, if you are in the dark, switch on the lights. If you’re sitting down, try standing up for a while (or vice versa).

For most people, the best way to manage the condition is just knowing CBS is a result of their vision loss and not other health problems.

If you have serious, disturbing visions, there are some medications that might be helpful. However, they don’t work for everyone. You should discuss this with your ophthalmologist.

Talk to your ophthalmologist and your GP about your CBS.

It could also help to talk about your feelings with your GP, a low vision specialist, counsellor or psychologist. They may be able to help provide you with ways to cope with the phantom images.

Since many health care workers aren’t familiar with Charles Bonnet syndrome, we suggest you print or order a copy of our Charles Bonnet fact sheet. This can help start the conversation, if you find your experiences difficult to explain. The CBS fact sheet is also available as a free audio recording on CD. 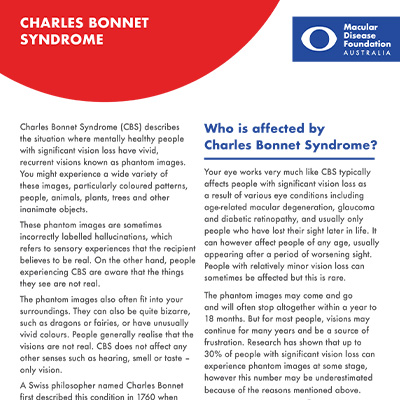 Managing vision loss is a key priority to maintaining quality of life and independence.

How does support from a carer help someone living with macular disease?

If you provide care or support to a family member or friend with vision loss, there are so many ways you can help make a big difference.

What help is available to me if I’m caring for someone with vision loss?

A carer is typically a family member or friend who provides unpaid care or support for someone living with a chronic condition, disability or mental illness.

In this Macula Menu, you’ll find some of our favourite recipes that are both delicious and packed with eye-healthy ingredients.

MDFA’s summer 2021 edition of Vision Voice newsletter is out now!

We’re seeking to clear up any confusion around deferring eye appointments during lockdown.

With Governments around Australia rolling out vaccines for COVID-19, a frequent question to our National Helpline is about safety of the vaccine when receiving eye injections.

The audio version of our autumn 2021 Vision Voice newsletter. It’s our newsletter to keep you up to date with what we’re doing on behalf of the macular disease community.

This newsletter leads with the Aged Care Royal Commission’s recommendation to make aids and equipment more accessible for older Australians – a major win for our community.

A proposal to cut Medicare rebates for eye injections is the next big issue we’re tackling on behalf of our community.

A resource booklet to help you understand vision loss and its impact.

Caring for someone with macular disease

A resource for anyone who is a carer for someone with macular disease.