Because they are both common conditions and happen as we age, cataracts and AMD often occur at the same time.

A cataract is a clouding of the normally clear lens inside the eye. Over time, a cataract can significantly impact vision. Cataracts are very common in older people. Certain types of cataract can occasionally occur in younger people. Some babies can even be born with cataracts. These are called congenital cataracts.

Cataracts can occur in one or both eyes. Most cataracts can be effectively treated with surgery.

Because they are both common conditions and incidence increases with age, cataracts and age-related macular degeneration (AMD) often occur at the same time.

What is a cataract?

In a younger eye, the lens is transparent. Light can easily pass through the lens, producing a sharp image on the retina. As we get older, parts of the lens can become cloudy, producing a cataract. This is a painless eye condition that results in the scattering or reduction of light reaching the retina.

Symptoms of cataract include a loss of clarity, blurry vision or washed out colours. You may also notice increased sensitivity to bright light, glare and haloes or rings appearing around lights.

With early cataract development you may not notice any symptoms or experience any vision impairment. As the cataract progresses, symptoms become more noticeable. Some people say that having significant cataracts is like looking through a thick fog.

Cataracts normally develop quite slowly over many years, but sometimes can develop more rapidly. They generally form in both eyes although not always at the same time or rate. Cataracts won’t get better on their own.

Cataracts are very common, especially in people over the age of 60. In fact, by the age of 70, everyone has some degree of cataract. This is a normal part of ageing.

Certain rare types of cataract can also occur in infants or younger people.

Cataracts can’t be prevented but progression may be delayed to a degree by:

There’s no evidence, at this time, that vitamin supplements or eye drops will reduce the risk of cataracts or reverse their formation.

Cataracts and age-related macular degeneration are common eye conditions that can affect older people at the same time. A common question is whether cataract surgery affects the development or progression of AMD.

Some studies and anecdotal reports suggest that cataract surgery may accelerate the progression of AMD. However, most major studies have shown no link. On balance, cataract surgery does not appear to contribute to worsening of AMD.

Sometimes, dense cataracts can mask the symptoms of AMD. When these dense cataracts are removed and replaced with new artificial intraocular lenses (or IOLs), the clarity of the final vision depends on the severity of any underlying AMD. In addition, the symptoms of AMD, such as distortion or blurring, can become more obvious once a cataract is removed. Because of this, some people have mistakenly concluded that the surgery made the AMD worse.

Sometimes cataracts may affect your ophthalmologist’s ability to diagnose or monitor AMD, diabetic retinopathy or other retinal conditions, so they may recommend cataract surgery.

In people with late stage AMD, most central vision is lost, and the person is very dependent on their peripheral (side) vision. If these people also have significant cataracts, cataract surgery can significantly improve the quality of peripheral vision.

People with conditions such as wet (neovascular) age-related macular degeneration or diabetic macular oedema may be receiving regular injections of a drug to reduce the formation of unwanted new blood vessels and leakage under or within the retina. If these people also have significant cataracts, it is generally considered appropriate to delay cataract surgery until the new blood vessel formation and leakage has stabilised. Elective surgery can then be safely undertaken.

Some eye operations, such as a vitrectomy – a type of retinal surgery – significantly accelerate the progression of an existing cataract or increase the likelihood of a new cataract forming. If a cataract has already started to form before the vitrectomy, the surgeon may suggest having the cataract removed and replaced with an IOL. Doing this at the same time as the vitrectomy will avoid the need for another operation soon afterwards.

How are cataracts treated?

The symptoms of early cataract may be improved with new glasses, brighter lighting, antiglare sunglasses, or magnifying lenses.

Despite these measures, if left untreated, cataracts will eventually result in significant loss of vision but the timetable for this is highly variable.

In almost all cases, cataracts can be treated extremely effectively with surgery.

Surgery involves the removal of the clouded lens from inside the eye, which is then replaced with a tiny, clear, plastic, artificial intraocular lens (or IOL). Cataract surgery usually takes less than 30 minutes, and often less than 15 minutes. It is normally performed under local anaesthesia with some sedation. Sometimes, if there are other complex factors, the cataract surgery may take a little longer.

If you have cataracts in both eyes, each eye will usually be treated on separate days, often weeks apart.

Cataract surgery is one of the most effective operations performed. Well over 90 per cent of people having cataract surgery notice a significant improvement in vision, and better quality of life. In general, the best outcomes are achieved when both eyes are treated. 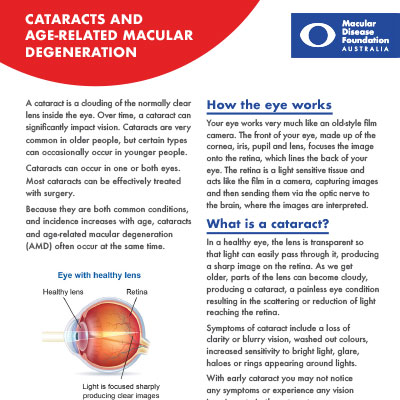 News from the macular disease community

In this Macula Menu, you’ll find some of our favourite recipes that are both delicious and packed with eye-healthy ingredients.

How MDFA is working with GPs, pharmacists and Aboriginal health workers

Our annual awareness campaign, Macula Month runs from 1-31 May 2022.