Despite one in seven Australians over 50 showing some signs of age-related macular degeneration, it’s still difficult to pick up cases of AMD in its earliest stages before symptoms occur.

It’s also hard to predict which patients will progress to the more advanced forms of the disease.

Prof Guymer developed a new suite of state-of-the-art techniques to better describe early AMD. This allows people at high risk of disease progression to be counselled more appropriately and monitored more closely. This then means vision-threatening complications can be picked up more quickly.

An inaugural MDFA Research Grant recipient in 2011, Prof Guymer is an eminent figure in Australian and international AMD research – and this study has transformed the way the disease is characterised across the globe.

Prof Guymer’s macular research unit at the Centre for Eye Research Australia (CERA) is considered a world leader in this intense field of research.

Through their grant, Prof Guymer’s team characterised an early stage of atrophic AMD they called nascent geographic atrophy (nGA). This term changed the lexicon of the disease and is now used universally for the early stages of cell loss. This early potential biomarker of cell death can be seen on retinal imaging called optical coherence tomography (OCT) and is facilitating early-intervention trials.

Highlighting the importance of understanding RPD has led to clinicians learning how to recognise these deposits on standard imaging.

Prof Guymer and her team have led the world in better defining how intermediate AMD is characterised, so that progression to vision loss can be more accurately predicted.

Prof Guymer’s MDFA grant contributed to a body of work that has earned a string of awards, membership of the international working group Classification of Atrophy Meeting (CAM) consensus committee, and global collaborations looking to develop artificial algorithms to detect nGA and RPD on retinal images, as well as to continue investigating the underlying cause of RPD.

Prof Guymer’s project also formed the basis of Dr Zhichao Wu’s PhD thesis at the University of Melbourne, for which he was awarded the Dean’s Award for Excellence. An optometrist and clinical researcher, Dr Wu has gone on to secure his own MDFA Research Grant to investigate novel imaging-based biomarkers of wet AMD development using OCT and artificial intelligence.

This article first appear in our publication 10 Years of Impact: Reflecting on the impact of investing into macular disease research. 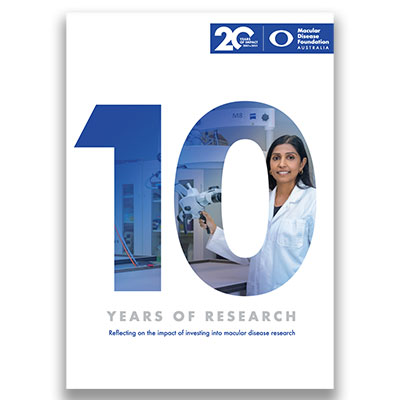 Celebrating the 10th anniversary of MDFA’s Research Grants Program, this free publication introduces you to all the talented researchers your donations have funded since 2011.

Researcher Dr Zhichao Wu is investigating techniques to better identify who is at high risk of progressing to late stage wet AMD.